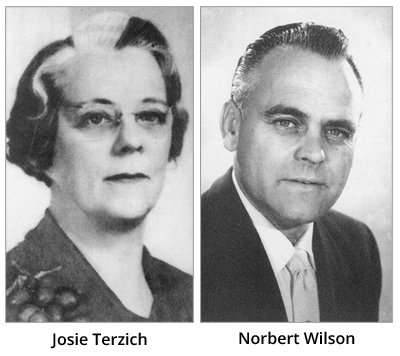 Its history began in 1919. when Josie Borzini Terzich. following the death of her infant son and her husband, began funeral service with W.B. O’Beirne Funeral Parlour. She was one of the first women embalmers in California and in 1926 became the first woman in the state to be elected Coroner.  She held the post for three terms, until 1938. In 1935, Terzich and Frank Bigelow, who also worked for O’Beirne, became partners and bought out the retiring W.B. O’Beirne.

After that partnership dissolved in 1938, Mrs. Terzich soon began construction of the Terzich Funeral Home, on the then outskirts of Sonora, opening for business in April of 1940.

Norbert “Holly” Wilson, had been working part time for Mrs. Terzich since 1936. Following military service in WWII, Holly returned to work at the funeral home and earned his embalmer’s license from the San Francisco College of Mortuary Science in 1947. He became a partner in Terzich and Wilson in 1950. With Holly’s return, they began to offer ambulance service to their community in 1947, and continued  for over 30 years until 1978. They open a 2nd Chapel in Tuolumne City in 1966, and that Bay Avenue and Pine Street Chapel. is currently celebrating its 53rd year of service to that community.

In 2012, Terzich & Wilson opened Mother Lode Crematory in Jamestown, in association with their long time partners in the Angels Memorial Chapel, San Andreas Memorial Chapel, and Oakdale-Riverbank Memorial Chapels, the Botto family of Oakdale.  This enabled them to serve those families choosing cremation services, both locally in the County and personally having our Funeral Family members, perform the cremation. 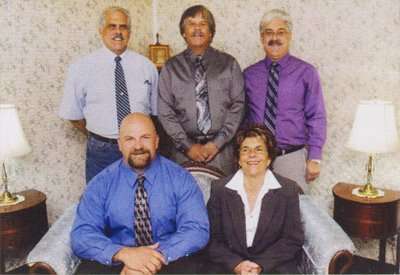 Holly’s children, Kathy Wilson Sells and Jeff Wilson, have managed the business together since 1987. Kathy’s son, Brian Sells, started working at Terzich and Wilson (T & W) in 1992, and earned his Funeral Directors license in 1999. In 2006, Brian and his wife, Yvette, bought Sierra Memorials, a Headstone and Monument business.  Jeff Wilson’s stepson, Chris Smyth, has worked for the family business since returning from college in 2002. Chris now runs and manages the family owned and operated crematory.

The firm has a longtime dedicated team, including John Moore (1974); and Donna Watson (2001). They have welcomed their newest associates, retired Pastor Ray Shopp (20l4), Glenn Moore (2021), and Dave Fong (2016). The Wilsons remember Bill Hawke, whose 43 years of faithful service will long be appreciated.